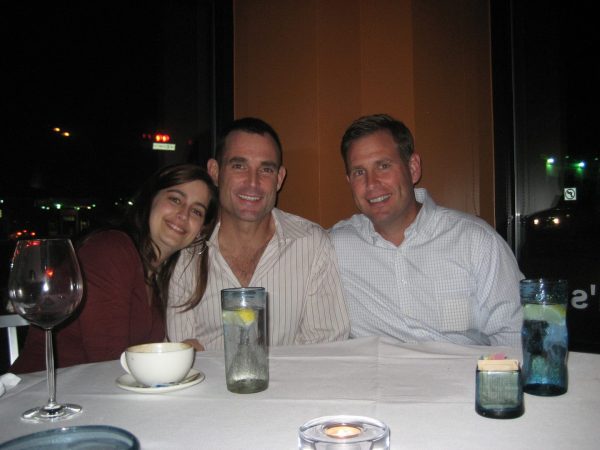 David would have been 56 today. A photo of us, my head resting on his right shoulder and our brother Tommy sitting at his left, pops up in my Facebook feed as a “memory”—as if I would forget this birthday without this visual reminder. The photo is from a restaurant in Houston called Julia’s where we had a fantastic dinner years ago, a restaurant that, like my brother, is now gone.

In my inbox, a daily email from the Writer’s Almanac says today, March 13, is the birthday of Percival Lowell, Janet Flanner, Pope Innocent XII, even Uncle Sam—at least the day he was “born” in the form of a cartoon character in 1852 in a publication called the New York Lantern. It seems David’s name, far more important to me than any of these, should also appear here in the list of VIP birthdays as I scroll.

Wikipedia says, “March 13 is the 72nd day of the year (73rd in leap years) in the Gregorian calendar. There are 293 days remaining until the end of the year.” There are 365 days—or 364 if next year is a leap year—before I feel quite this feeling again.

I saw Tommy last week when he turned 53. I know the proximity in their birthdays brought both celebration and competition growing up. Now it causes only sadness. Already, Tommy has surpassed David’s life by six years, which seems like bad math; David was born three years before Tommy. But this is what death does; it changes math. It made Tommy my oldest brother.

Forty-seven years isn’t so bad, and anyone who knew David knew he lived more than most people do in a lifetime in that span. Still, it’s hard not to feel cheated each and every year, as I am greedy. Wanting more, so much more. And unable to add much.

Though I had a rare dream about David a couple of weeks ago, so rare in fact that it might have been only the third time that he has appeared in my unconsciousness this way, unsummoned by me, a welcome visitor. In the scene, David was driving a speedboat—too fast, no surprise—while I sat in the seat behind him, being splashed with spray and laughing raucously. It felt dangerous and safe at the same time, a sense my brother provoked easily. Upon waking, I cried as I cried when I lost him the first time, in real life, the way waking up reminded me of the reality each and every day for years, and not just on his birthday.

It was strange last week, as always, to be back “home” in Houston, surrounded in our mother’s house by her photos and mementos of David—her own shrine, different from mine, from Tommy’s—reminding me of our deeply varied relationships, the relationships that still go on for each of us, even now, as a wise writer recently wrote me.

I have not yet lived as long as David did, but I hope to, and I hope to surpass him too. As the baby of the family, I wonder if I will outlive everyone eventually, if not also go beyond their years, their numbers, their experiences. I wonder, as we all must do, whether we will meet again, somewhere where numbers don’t exist.

I love Tommy, and I know he loves me too, but we are unlikely to put our heads on each other the way I did that night after dinner, warm with red wine, with good food, and with the comfort, the security, the assuredness of my siblings, with our brother David between us.

We are minus one and counting.

Ah, holidays. They are thorny for most people over the age of five on some level, I imagine. Between family and travel and scheduling, there are many pitfalls. Today, despite the fact that my husband and I made a deliberate decision to avoid all of these potential stressors and decided to stay home and relax, I am feeling a trifle taxed, and also a little sad — perhaps precisely because we avoided them.

His family has issues; so does mine. He has issues; so do I. Traveling is taxing. The puppy is real — and while adorable, genuinely high-maintenance. And we are really homebodies. We like visiting family more at off-times, when there isn’t so much pressure. Still, I miss them all an awful lot right now. A lot more than I thought I would. I can’t deny it.

Despite the booking of plane tickets way in advance or driving through bad weather, the financial pressure of buying presents, the great food that makes you eat far too much, the not-so-great food that challenges your politeness, the tiredness that comes from running around seeing people, the topics that must be avoided, the awkwardness of opening certain presents from that one relative whose intentions are so good, the forced smiling, and the small talk, there’s a reason so many people do it.

It’s been a very long time since Christmas Eve was so thrilling that I lay in bed, wide-eyed with excitement, unable to sleep, thinking about what Santa would bring or not bring, sneaking trips out of my bedroom to tiptoe past my parents’ bedroom and peek down the carpeted stairs all the way into the living room where the tree, alight and magical, waited like a beacon of all things good to be surrounded by shiny presents. Today, at age 43, I understand why having a kid around would help my spirits.

It’s not like we’ve been totally un-festive. White lights are strung around the porch outside and the wreath my dad and stepmother send each year is hung on the front door. We’re doing what we planned: last night we ate pasta on the couch while watching Elf, tonight it’s take-out pizza with It’s a Wonderful Life, and fish chowder tomorrow likely accompanied by A Christmas Story. I may watch The Grinch Who Stole Christmas a third time. We’ll open a few presents and take the dogs for a walk.

It will be like a special weekend. Which it is.

But had to give my dad a call this afternoon, just to hear his kind, baritone voice, to ask about the carols he and my stepmother will sing tonight at midnight mass, to find out what presents he got her, to tell him I miss him. Mom’s next. Then I’ll be texting my brother.

Next year, I think I may need to sign back on for complicated — since keeping it simple seems like it may be an impossibility.